Show has already sold almost 75% of the space set aside for the upcoming edition, set to run from 5th to 9th February 2018
Cevisama’s organizing committee met today at Feria Valencia to assess the progress of sales and the objectives for the next edition of the fair, which takes place from 5th to 9th        February at the Valencia exhibition centre.
According to Manuel Rubert, president of the ceramic tile and bathroom fair, “the outlook is very positive and indicates that, after a number of very hard years that ensued from the crisis, the economic recovery is now a fact.” In Rubert’s opinion, “the sales figures are evidence of companies’ commitment to and belief in Cevisama and confirm the fair’s potential as an international showcase and key business platform for Spanish manufacturers.” 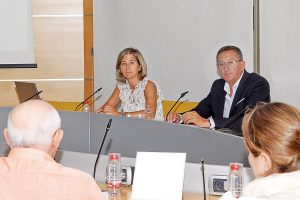 The fact is that just one month after the sales drive for the upcoming show began, almost 75% of the space set aside for Cevisama 2018 has been booked – nine instead of the previous 8 pavilions and well over 100,000 square metres of exhibition space .  As the president and the director of the fair, Carmen Álvarez have explained, though, “the aim is not just to grow the size of the event but to increase demand too” and the fair has to this end boosted the budget for visitor recruitment initiatives.
Priorities include “ensuring that top level specifiers looking for quality product to use on major projects come to Valencia.” Álvarez indicated in this regard that a number of deals have been struck that mean direct recruitment initiatives will be targeting schools of architecture and interior design right across Europe. The challenge? To ensure that the top professionals in significant markets such as the UK, Germany, France and other countries of northern Europe attend.
As part of this initiative, targeted at the contract sector in particular, Cevisama is putting together a programme of lectures that is “much more ambitious” than in previous years and will make the Architecture and Design Forum and Cevisama Lab magnets for architects and interior designers the world over. The director said that details will be made known over the next few months.
On another front, Cevisama is in the final phase of closing deals with major retail groups in priority markets such as Europe and north America. As another element of its international promotion plan it has launched marketing and advertising campaigns and set off on a number of ‘sales trails’, currently focused on Italy’s major manufacturing areas.