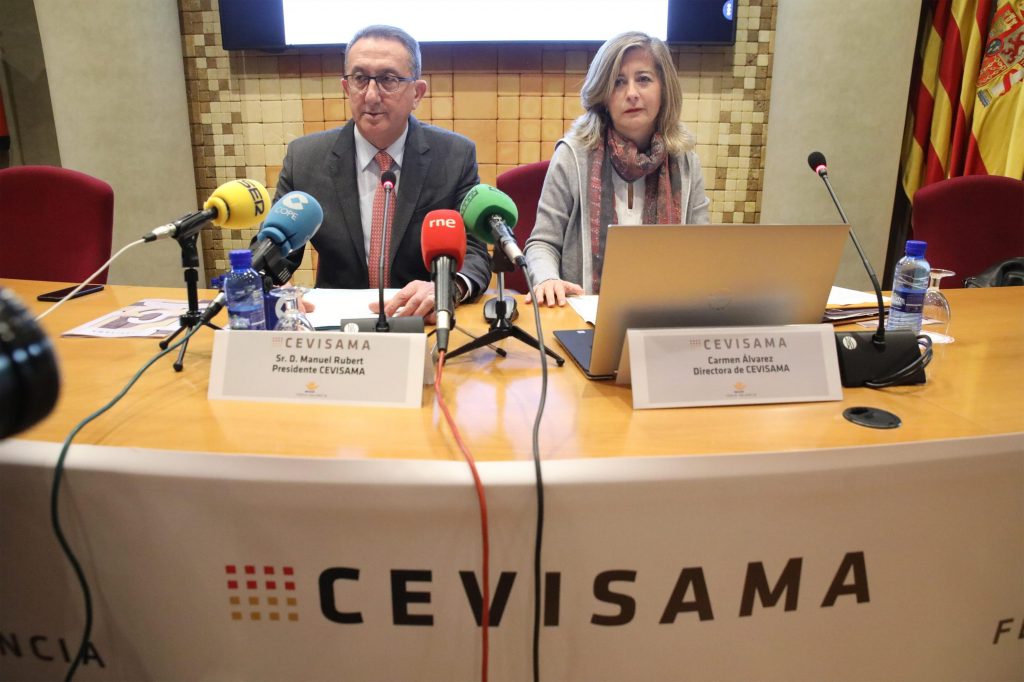 Cevisama, the international showcase that gathers together the latest designs from the ceramic tile and associated industries and bathroom furnishings and natural stone sectors, is all set for this year’s show, which runs from 28th January to 1st February at Feria Valencia. The fair will once again have more products on show and will be taking up more than 120,000 square metres, gross, of exhibition space. A total of 793 companies – including direct and indirect exhibitors – will be showcasing what they have to offer. This number is 10% higher than in 2017, which was a comparable edition in that machinery for the ceramic tile industry is not included in odd-numbered years. Of this number, 542 exhibitors are Spanish companies, whilst 251 are foreign brands from a total of 36 countries, especially from the European marketplace and, primarily, Spain and Italy.
The fair continues to develop its international profile, not just with foreign visitors attending but also through foreign companies exhibiting. In point of fact, the number of brands from other countries that are exhibiting is up 20% and every time more companies from countries such as Italy, Portugal, Poland, Turkey and Germany, amongst others, are joining their Spanish counterparts exhibiting at Cevisama. As Miguel Rubert, the fair’s president, explains, “Cevisama’s position on the world’s trade fair calendar is getting stronger and stronger and the Spanish marketplace is once again becoming attractive to international companies. As a consequence, the content of Cevisama is continuing to grow, on the back of the Spanish industry’s confidence in and commitment to it and also as a result of growing interest from other countries.”
Considered to be the fourth best Spanish trade fair in terms of the value it delivers to the trade (“Ranking of the 20 most significant fairs”, Instituto Coordenadas de Gobernanza y Economía Aplicada), Cevisama has turned the focus of attention for this 37th edition onto architecture and interior design and has launched fresh initiatives linked to the contract channel. It has also put together a programme of high-level lectures designed to add value and appeal to specifiers.
One of the main new initiatives is the addition of hall 6 to the usual offering. The hall will feature its own special décor, along with exclusive networking and catering zones and will be dedicated to the contract sector. Access will be via Feria Valencia’s North Forum, through a specially designed “Projects Hall” which will feature displays of unique pieces by prestigious manufacturers.
As for the programme of events, the organisers have once again entrusted distinguished architect and critic Luis Fernández-Galiano to put together an exceptional programme, the main attraction of which will be the Cevisama Lab Architecture Forum, which features masters such as Pritzker Prize winner Jacques Herzog, French architect Dominique Perrault and the Nieto Sobejano studio, amongst others, as well as celebrated interior designers such as Francesc Rifé and Pepe Cortés.
The other significant visitor group, distributors, is also being paid special attention at this edition of Cevisama. For the second year in a row and with support from trade association Andimac, the fair is hosting Distributor Day and an award ceremony that will recognise the most outstanding companies and businesses. Separately, Cevisama and Ascer have joined forces with the Generalitat Valenciana to create the Ivace Awards for Promoting Tile of Spain, which in this first round will pay tribute to the top distributors in a key market for the ceramic tile industry: the United States of America.
Visitors from 65 confirm attendance
On the demand side of the business, the last edition of Cevisama achieved record attendance, with more than 94,000 visitors, including 17,000 from outside Spain. The aim, according to the fair’s director Carmen Álvarez, “is to overtake the figure and move closer to the ceiling of 100,000 professionals.” With this particular challenge in mind, the fair’s organisers have undertaken a number of promotional initiatives over the last twelve months to attract visitors with potential and have closed deals with distribution groups in the US and the main European markets, as well as with colleges of architects and interior designers.
Along with this and as part of the Cevisama Business Club programme, the event has invited leading companies in several international markets to attend and has received confirmations from professionals in 65 countries. What is more, and thanks to support from ICEX, through Ascer, almost a hundred trade journalists will be attending, particularly from the traditional countries of Europe, Eastern Europe, North Africa, the United States and Canada.
Cevisama takes place at Feria Valencia at the same time as Espacio Cocina-SICI, the dedicated kitchen furniture, equipment and technology fair, which features leading names from the industry.
Full information and the detailed programme of events at Cevisama 2019 are available at www.cevisama.com.