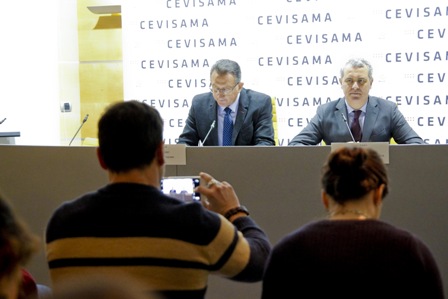 This morning Cevisama’s president Manuel Rubert and Feria Valencia’s sales director Jorge Fombellida gave an official presentation of the 35th edition of the fair, set to takes place at Feria Valencia from 10th to 24th February.
The International Trade Fair for Ceramic Tile and Bathroom Furnishings, one of the foremost events on the international circuit, will be showcasing the very latest in ceramic floor and wall tiles, frits, glazes and colours for ceramic, roof tiles and bricks, materials and tools, natural stone and bathroom equipment. 721 companies from these sectors will be gathering over an exhibition area in excess of 110,000 square metres including 511 Spanish companies and 210 foreign brands from a total of 38 countries, particularly from Europe and primarily from Italy.
According to Rubert “this is going to be the best Cevisama we have had in the last nine years”. Indeed, 18% more exhibition space has been sold than in 2015, the last comparable year as it did not include machinery either: the sector only exhibits at Cevisama in even-numbered years.
As Cevisama’s managers have explained, this progress is the result of a combination of an increase in the offering from the ceramic tile sector and an upswing in the bathroom industry, whose main sales platform in Spain is Cevisama. The fair has brought leading companies from both sectors back to the show that had taken a break from exhibiting and has filled all eight pavilions at Feria Valencia.
Cevisama’s president recalled last year’s healthy visitor numbers: 78,000 professionals, including 14,923 buyers from foreign markets. For Rubert “the aim this year is to hit a new record and break the barrier of 15,000 foreign professionals.”
Fombellida, for his part, underscored that over the last few months Cevisama had boosted its initiatives designed to recruit as many foreign visitors as possible. He said that the priority target markets had been Europe – France and the United Kingdom in particular – and the United States. “We invited 690 companies in the main international markets as part of the Cevisama Business Club programme and professionals from 67 countries accepted and will be attending.”
As well as the ceramic tile and bathroom shows, Feria Valencia is also the setting for two complementary exhibitions: the second edition of Espacio Cocina – SICI, the dedicated contemporary kitchen furniture and accessories show, and the very first PROMAT, the Materials and Technology for Construction and Renovation Trade Fair.
In addition to its offering geared to architecture, renovation and construction, the “See you in Valencia” programme provides a considerable number of parallel events including, most notably, the Architecture and Design Forum, which this year features big names including North American David Carson, a genuine design icon; Italian architect Benedetta Tagliabue; the head of projects at international architectural practice MVRDV, José I. Velasco, interior designer Pepe Leal and Rafa Zaragozá, creative director at Thinkers Co.. Another of the items on the See you in Valencia programme is Trans-hitos, the exhibit arranged jointly by Ascer and the Institute for Ceramic Tile Technology. This year’s exhibit is sub-titled “Inter-actions” and will be showing new uses of ceramic through ground-breaking projects such as the 2D design by Harvard University, based on research into how to place ceramic material so that its thermal performance is the best it can be. 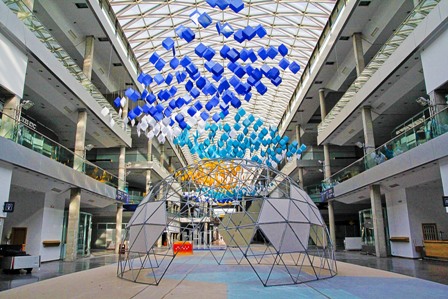 Also calls for entries have gone out for the Cevisama Lab ceramic tile and bathroom design competitions, for the prestigious Alfa de Oro prizes and for the new “Best Interior Design on a Stand” competition, through which Cevisama wants to motivate manufacturers and recognise the effort they have invested in creating their product displays at the show.
“See you in Valencia” includes other events in the city of Valencia. One of these is the CIDI Biennial Latin American lnterior Design, Design and Landscaping Exhibition in the Almudín. There will also be a performance of traditional Valencian singing and dancing, at Valencia City Hall (Ayuntamiento) on the 21st at 20.30, whilst the The City Hall will be setting up a ‘falla’ (a huge cardboard statue) and an information stand at the main entrance to the exhibition venue to encourage visitors to come to the 2017 Fallas, a festival that has been designated an element of Intangible Cultural Heritage of Humanity by Unesco.
Lastly, Cevisama’s president has announced that the dates approved for the next edition of the fair are 5th – 9th February 2018. The event will be launching a new corporate image for next year’s show. With “Create your own reality” as the strapline the creativity reflects the ceramic tile sector’s values and the many potential different applications for the material, way beyond just as a mere covering. The image is the work of Ferran Salas, Adrián Vidal and Carlos Jiménez, of Minister of Munitions, the agency the fair’s organising committee has appointed to work on next year’s edition.